No one goes into the education profession for accolades or to make big bucks, although I wish the latter were a reality.  The choice one makes to teach and lead is almost always grounded in the innate desire to make a positive difference in a child's life.  On some days, this might seem like an impossible task as a myriad of challenges makes it difficult. While these may vary, the result can lead to questioning the chosen career path. However, when the dust settles, educators can take solace in the fact that the actions they do take to help kids learn do make a difference in both the short and long terms.

Culture, in a classroom or school, is built on a strong relational foundation.  Without trust, there are not relationships. Without relationships, no real learning occurs. While achievement often gets the most attention or scrutiny, it's the interactions with kids that set them up for success and often have the most impact well after they have left a classroom. In the final chapter of Disruptive Thinking in Our Classrooms, I highlight the following areas to make this a reality: 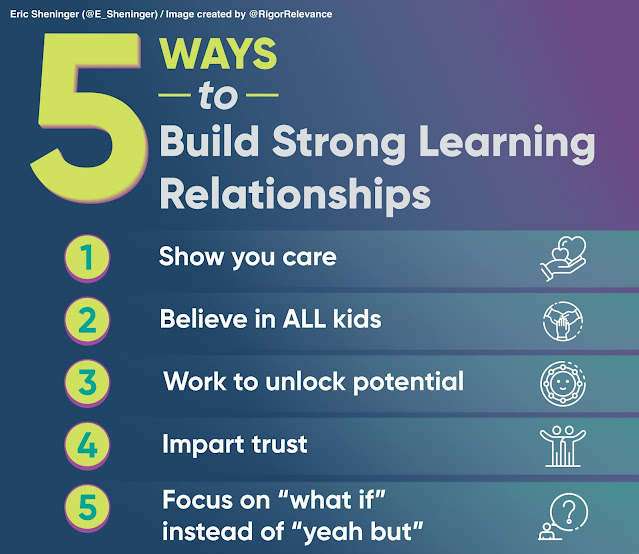 If the goal is to get students to think disruptively, then the right culture has to be in place.  Hence, the importance of developing powerful relationships that have the potential to withstand the test of time. Steve Goodier shared a brief story titled "A Teacher's Hand," which speaks to the immense impact educators have when they embrace the tenets above:

Thanksgiving Day was near. The first-grade teacher gave her class a fun assignment—to draw a picture of something for which they were thankful. Most of the class might be considered economically disadvantaged, but still, many would celebrate the holiday with turkey and other traditional goodies of the season. These, the teacher thought, would be the subjects of most of her student's art. And they were.

But Douglas made a different kind of picture. Douglas was a different kind of boy. He was the teacher's true child of misery, frail and unhappy. As other children played at recess, Douglas was likely to stand close by her side. One could only guess at the pain Douglas felt behind those sad eyes. Yes, his picture was different. When asked to draw a picture of something for which he was thankful, he drew a hand. Nothing else. Just an empty hand.

His abstract image captured the imagination of his peers. Whose hand could it be? One child guessed it was the hand of a farmer because farmers raise turkeys. Another suggested a police officer because the police protect and care for people. Still, others guessed it was the hand of God, for God feeds us. And so, the discussion went—until the teacher almost forgot the young artist himself.

When the children had gone on to other assignments, she paused at Douglas' desk, bent down, and asked him whose hand it was. The little boy looked away and murmured, "It's yours, teacher." She recalled the times she had taken his hand and walked with him here or there, as she had the other students. How often had she said, "Take my hand, Douglas, we'll go outside." Or "Let me show you how to hold your pencil." Or "Let's do this together." Douglas was most thankful for his teacher's hand. Brushing aside a tear, she went on with her work.

The story speaks of more than thankfulness. It says something about teachers teaching and parents parenting and friends showing friendship, and how much it means to the Douglas's of the world. They might not always say thanks. But they'll remember the hand that reaches out.

Never underestimate your vital role in impacting the life of a child. Students might not realize it now, but later in life, many will thank you in their own way for your belief in and commitment to them. To fully prepare all learners for their future, we must create classrooms in which disruptive thinking is a major component of the learning pro¬cess. However, disruptive thinking in the classroom will only become a reality when priceless relationships are in place. With these in place, your impact will be felt for generations as the learners you influence today disrupt the bold new world in ways that change it—and us—for the better. This is your lasting legacy.

Every business should have a written business plan. Regardless of its purpose, determining a direc…

Why Your Operating Model is Not Just Your Organisational Structure